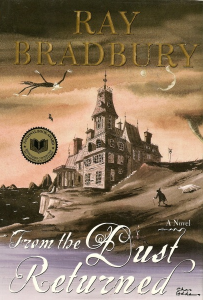 Samhain, or Halloween as it’s commonly known in North America, has long been a time for ghost stories and spooky tales. Some authors, like Stephen King, Anne Rice, and Clive Barker, have become famous writing horror. But when it comes to Halloween tales, there is one writer who is master: Ray Bradbury.

Ray Bradbury has October in his bones, his blood laced with mysterious liquors from dusty tombs. You’d swear desiccated yet strangely animated tiny spiders might scurry out from the pages of his books as you read. And when you’re immersed in one of his spooky stories you feel electric yet oddly familiar chills creep down your spine.

“The Halloween Tree” is an excellent book to read aloud to children who like spooky stories. It takes the reader on a whirlwind tour of the various historical influences that have added up to what we now know as Halloween. The characters are led to ancient Egypt, Greece, Italy, and Britain where they witness ancient pagan celebrations of the dead. Later, they see Witches and Pagans persecuted during the Burning Times, and learn how the occupying faiths destroy, hide, and sometimes absorb previous faiths. They travel to Mexico for Day of the Dead revels. Then, finally, they return home to North America to see how Halloween is a continuation of what went before.

The only real quibble with “The Halloween Tree” is that the section about Druidic Britain reinforces the highly questioned claim that there was a Druid god of the dead known as Samhain. This claim is believed to have been fabricated during the 1800s by Christian writers who were trying to discourage Samhain observances. Samhain means “summer’s end.” There is little evidence that it was ever the name of a Celtic or British deity.

Adults wanting to read some truly chilling and memorable spooky stories should seek out Bradbury’s short story collection “Long After Midnight,” and particularly the story “The October Game.” Older teens would probably enjoy these stories too, but children would find at least some of them far too disturbing.

One of Bradbury’s most recent novels, “From the Dust Returned,” is very much a Halloween story. It has been released in Kindle ebook format, paperback, and hardback. It relates tales about a very peculiar family: A Thousand Times Great Grandmère; day-sleeping Mother and Father; the angelic sister Cecy who flies on the wings of dreams. Uncle Einar, gentle, with his vast silk-like wings. Cousins and aunts and uncles innumerable who take forms great and small, often forms that vary when you shift your gaze away. And the main character, a mortal boy named Timothy, who was adopted into this strange family.

“From the Dust Returned” actually started as a short story called “Homecoming,” which Bradbury first had published in Mademoiselle magazine. Mademoiselle liked the story so much they decided to design their whole October 1945 issue around it as a centerpiece. They hired the offbeat cartoonist Charles Addams to create artwork which became a two-page spread depicting Bradbury’s remarkable Family and their October House. The two-page spread is printed in both the hardcover and paperback editions of the novel, so you don’t have to visit the library and look through old copies of Mademoiselle to find it.

Charles Addams was clearly inspired by his work with Bradbury; the infamous Addams Family characters are a direct result of their correspondence and mutual friendship.

The peculiar Family haunted Bradbury for years, appearing in various other short stories, until he brought them all together again in “From the Dust Returned” as a novel. It was published in 2001 and has been awarded the National Book Award for “Distinguished Contribution to American Letters.”

“From the Dust Returned” is one of those novels that you wish would let you read on forever with no end – when the Family hold their homecoming, you feel a surprising tug at your heart-strings compelling you to join them as your own.